I've deleted enough tweets to know that I should never get a tattoo.

You’re right, drunk tattooing always leads to huge regrets. Personally, I didn’t realize a tweet could be taken back so I guess you are lucky that Twitter is your addiction and not ink. Curious, I decided to see what tweets you felt you could live the rest of your life with and thought I’d pair them up with correlating tattoos. Your tweets do, after all, leave their mark on who we think you are and how we see you.

I hope you are ready, Abby. This is you:

I wish I could set the clocks back to a time before I was excited about an extra hour of sleep.

I've never protested before, but they were out of my favorite dish soap, so now I'm on the opposite of a hunger strike.

The papers say, "Restraining order," but your eyes as seen through my binoculars say, "Playing hard to get."

I like to divert attention from how sexy I look in my old yoga pants by tripping over and then looking accusingly at invisible objects. 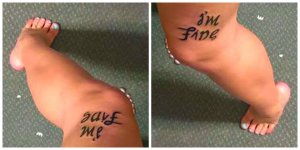 I assume a majority of profanity was created by people who were stuck behind horses and buggies that didn't know how to merge. 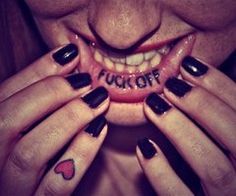 Today's look could best be described as, "personification of a typo."

These tattoos represent 6 of your most recent tweets out of nearly 14000! Well, what do you think? Do these tattoos accurately reflect the woman you are? I really do want to hear what you think of these tatts and wonder if not these then which tweets would you represent in tattoo and how would they look?

Thanks for the inspiring fodder,